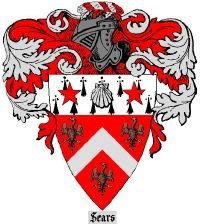 The following is an explanation, from the Internet Surname Database, of the origin of the name of Sears:

Most surnames have only one or possibly two sources of origin, this surname is different - it has five! These maybe summed up as (in order of likelihood), a derivative of the pre-medieval personal name 'Saher' or 'Seir', which itself is a short form of the Norman name 'Sigiheri' introduced into England after the Conquest of 1066. This itself has a Germanic ancestry and loosely translates as 'victory - army'. The second possible origin is from the medieval occupational name for a wood cutter, 'sayhare', although the usual surname is now 'Sawyer'. The third is from Middle English 'say(en)' or 'seycen', to say, and literally means a professional reciter, one whose occupation was to read or recite both prose and poetry, and no doubt news and gossip as well. The fourth origin is from the medieval occupation of assaying metals or tasting food, derived from the Old French 'essay', meaning a trial or test. The correct spelling in Middle English was 'assayer', which appears to have been foreshortened. The plural spelling of the name is a patronymic form, meaning 'son of Sayer', whilst the variants include Sayer, Sayre, Saer, Sare, Seyer, Sear, Seares, Sears, Seer, etc. An unusual recording is that of William Sayers, who emigrated to , leaving on the ship 'Bonaventure' in January 1634. He was therefore one of the earliest of the Colonists to . The Coat of Arms granted in in 1620 by James 1st, has the blazon of a gold field, charged with three gold cinquefoils on a back cotised bend. The first recorded spelling of the family name is shown to be that of Richard le Saer, a witness, which was dated 1204, in the Assize Rolls of Yorkshire, during the reign of King John, known as 'Lackland', 1199 - 1216.

“We have been collecting data about the SEARS family since 1976 and currently have a PAF database with over 50,000 relatives of one SEARS or another. The primary source of information is Samuel P May's, The Descendants of RICHARD SARES (SEARS) of , 1638-1888 with an APPENDIX containing some notices of other families by the name of SEARS, 1890, Joel Munsell's Sons, .”

This book is available free online on Google Books.

“May was a member of the New England Historical and Genealogical Society and married two SEARS sisters (not simultaneously). As a result our SEARS information comes primarily from the New England branch of the family (WARNING- The Following Tree is a nice conversation piece but it has many Genealogical Errors - PLEASE DO NOT BASE ANY GENEALOGY WORK ON THIS TREE -Click here to see a drawing of Richard's Tree[250K]).”

“Please note: No one has yet proven who the Ancestors of Richard Sares (Sears) the Pilgrim, of Plymouth Colony were. Please don't fall into the trap promulgated by Mr H G Somerby that John Bourchier Sears (Sayer) is Richard's father. It has not been proven that Richard had a daughter Mary who married a Worden (Werden) and neither has it been proven that a Knyvet Sears was a son of Richard. In fact much work has been done to disprove the existence of Knyvet!”

Go online and take a look at the document form of the Richard Sears ancestry tree at http://www.searsr.com/familyr/pafg01.htm. If you cannot look at the list online, have someone help you. It is a huge listing of 8,000+ names, dates, and other interesting information, starting with Richard and proceeding to modern times. This document has been worked on by the people of the Sears Family Association since 1976 and is professed to be very accurate. We’re waiting for Ray Sears, the Sears Family Association coordinator, to add the current information from Orange Sears to the present day to their list of Sears names. 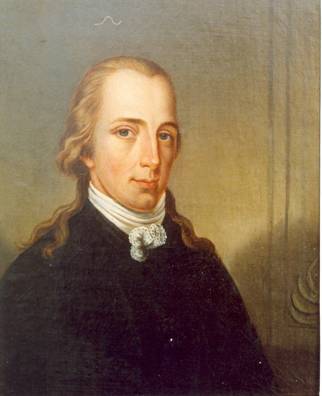 The ancestry lineage from Richard Sears to Steve Sears is as follows: 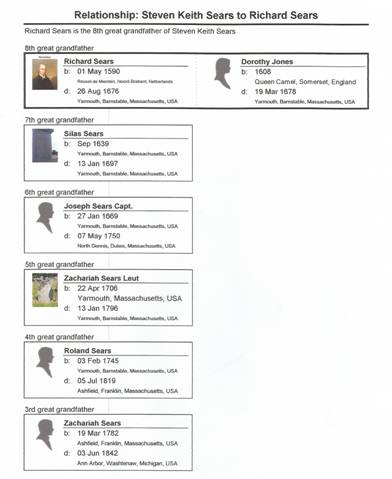 You can see the detailed information about the Sears family on www.ancestry.com. The ancestry tree name is the Steven K Sears Family Tree. If you are not a member of ancestry.com, please make a request to see it, by sending your email address to us.

Some of this information will be on our website at www.searspirit.com.

Richard Sares (Sears) is the primary patriarch of the Sears family in the . He did not come here on the Mayflower (1620), but came shortly thereafter in the early 1630’s. Wikipedia states the following:

Richard Sears was an early settler who lived in both the Massachusetts Bay Colony and Plymouth Colony. Today, over 20,000 people can trace their lineage to Richard Sears. These people have had an impact on not only the British Colonies but the United States and the world. Today, many thousands of those descendants live in the alone.

Although it seems that Richard Sears and Dorothy had three documented children, they may have had others, but this is not proven. The three children that the Sears Family Association believes existed are Capt. Paul Sears, Leut. or Lieut. Silas Sears, and Deborah Sears.

Leut. Silas Sears was a  protector of the new American colonies against the American Indians and invasions by other countries. His son, Capt. Joseph Sears was also a protector  and Leut. Zachariah was in the Militia during the French and Indian Wars.

Veteran of the American Revolution, Rowland Sears removed to , and bought a farm, May 1773. He was in Lt Bartlett's , which marched on Lexington Alarm, 22 Apr 1775, and was credited with 5 days' service and mileage. He subsequently enlisted in Capt Eben Webber's , Col John Fellows' Regt.

Almond K. Sears, received two purple hearts and the flying cross award while serving in WWII as an AF pilot. There is quite a lot of information on www.searspirit.com regarding his time in the Air Force.